You Can Get Anything You Want

I arrived in Patagonia, Arizona for the very first time in 1993. The bitty place along the southern border met spring that year with a spectacular bloom. The tallest cottonwoods in North America make their home along Sonoita Creek. That they are that much larger, in a town that is just that much smaller, exaggerates the terms of being smitten with this treasured place.

By all accounts what work a hearty new arrival might find Patagonia is less than none. Santa Cruz County has been drying up for decades. Patagonia for all its rural majesty requires that you come prepared to bet on yourself. I’d met a biologist that had wagered his life. He was sent by the Smithsonian to study the rarest and tiniest of birds… the elf owl. He had found a grand total 37 individuals scattered over thousands of square miles both near and far along the southern Sonoran Desert. Elf owl hunting is convenient to nothing. It came up in our whittled  conversation that once his research was completed he’d likely remain here instead of moving on. That’s how the town grows.

No two people are alike. Patagonia tends to attract the oddest lot. The binding that glues souls together here is quirkiness. One thing everyone should understand is that big bugs become a part of your daily awareness. Then there are the venomous creatures you’ll share Patagonia with. Then, there are the many different types of hummingbirds that make their home here. You’ve got drug smugglers and Border Patrol Agents playing cat and mouse. All this in a town you can walk end to end in less than ten minutes if it’s not too hot and your not too addled by drink.

There is nothing really you can do in Patagonia. Not on your own. If you stick it out your life fills up with time spent sharing mutual circumstances with neighbors. You’ll borrow sugar, have a cup of coffee, barbecue steak on mesquite wood and knock tequila down then chase it with as ordinary a can of beer as the least amount of money will buy. 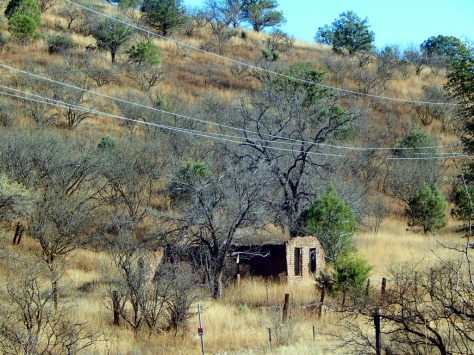 Weather is a good topic to talk to death. Maybe a friend has four wheeled off the mountain, where they homestead, to come argue at the Wagon Wheel over the political Armageddon the legislature is the fault of in Phoenix. The dang urban refugees that have made home here have brought their permissive and decidedly progressive ideas with them. Patagonia’s problems do not require ideology. You can toss that there narrow mindedness into the septic tank.

A random cross section of humanity has been littered throughout the town. The spiritually awakened are cheek to jowl with the atheists. What remains of the ranchers holding on here bellies right up with the radical environmental activists. Everyone aims to improve Patagonia so long as it does not involve pavement. There is little use for improvement. Dirt and dust are preferred. If that seems a bit contrary that’s the whole point of the thing. You will find that a dirt road self selects a new arrival. If they can see the beauty in dirt that is a sure sign that they will be best suited to fitting in here.

About now, in spring, is glory in Patagonia, Arizona. It’s the time to come. As soon as you are ready. Many of the migratory birds are moving through. The mesquite is blooming and Sonoita Creek is running. Get off the pavement, park that rig, take a hike. Think about things. Be available for nothing. If you are lucky enough you might just find the biggest prize of all, the chance to be in intimate rural contact with yourself. 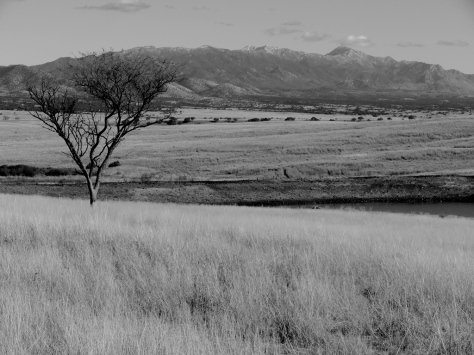 San Rafael Valley Southeast of Patagonia with the Huachuca’s Yonder…