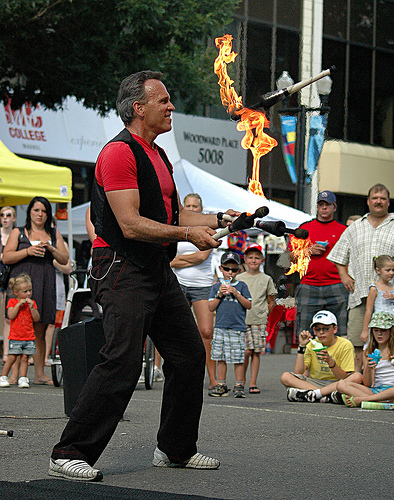 I was there when the scenes exploded. The artists medium was variety entertainment. The venue was street. Street was the canvas of choice. Indoor ticketed facilities had been a dead end for decades. Like wildfire the spreading news of variety acts turning a good buck out on a sidewalk drew in more and more talent willing to give the thing a try.

We were busy tipping the carts over, ignoring convention, abandoning restrictions and jumping on the bandwagon. Fern bars and fire juggling were in this era synonymous with this new thing emerging.

Standup comedy was a rocket ship. European cities were fertile ground for the impromptu showman. Summers in Western Europe and winter in Thailand.

We didn’t know how good we were. Nobody had gone from street to stardom yet and maybe nobody would make it all the way to the tippy top of the highest rung of the ladder. Robin Williams played street shortly. He’d gotten picked up from his open microphone appearances at the hole in the wall comedy clubs in San Francisco. The Other Café and Holy City Zoo was the location. Prior he’d worked the steps of the New York City Public Library and briefly appeared at The Cannery in San Francisco.

But, there were others who you know. Robert Shields of Shields and Yarnell, Michael Davis who worked Sugar Babies and A Whitney Brown who was a big deal at Saturday Night Live. All came from the street and all made millions of dollars working at the highest levels of the entertainment industry.

They all had that intangible creative anxiousness. Awkward offstage and on fire when on. Many of us made up the scenes that these talents emerged from. All of us working with some blend of talent and passion and trying our best to keep up, to fit in, to raise the bar, to maybe catch a break and ride along up the ladder. Some of us felt street was a creative end in itself. We were part of a scene that peeled back one more layer of uptightness that had been the hallmark of the previous decade. More tomorrow…