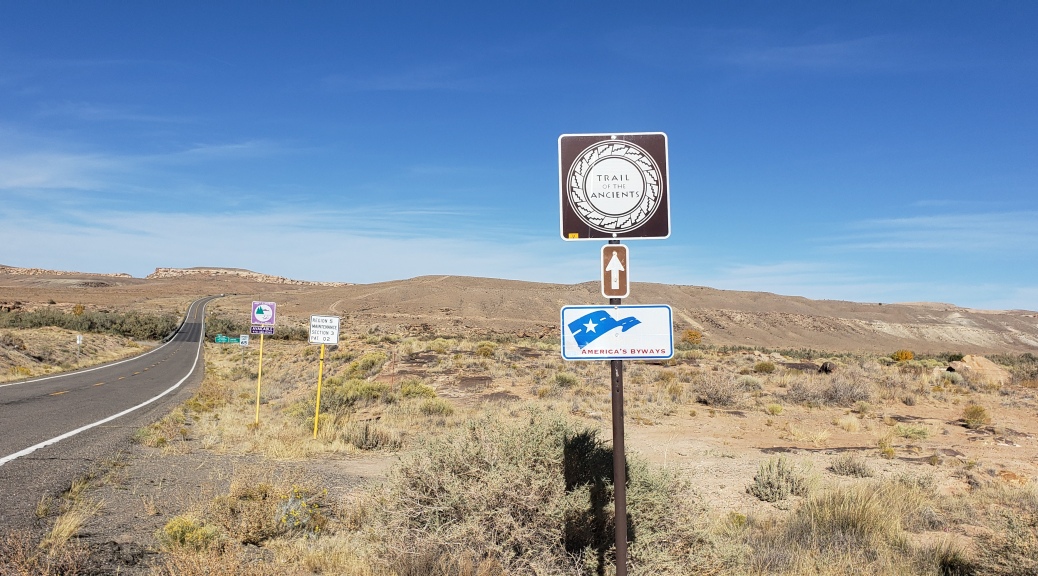 In New Mexico ancient human footprints have been discovered at White Sands National Park. Scientists have identified adolescent sized prints to 23,000 years before present. Our first people moved along the coastline netting fish for food while drifting south by sea craft. Insight into this migration is likely rendered impenetrable by the expanding ice sheet of 26,000 years ago that scrubbed away evidence of our first ancestors’ migration patterns.

Second route of the ancients was taken by traveling inland. Prior to the last glacial maximum, I’m speculating here, was likely about 30,000 years before present. This was a warmer and wetter American West. Massive lakes some hundreds of miles in length in Nevada, Utah and New Mexico created habitat for safe travel along the shore in floating vessels while hunting and gathering.

Sixty miles southeast of Albuquerque there is dry lake bed and then further south is White Sands National Park. We haven’t any evidence of whether these first people arrived from the north or the south. What we do know is that it was warmer and wetter that the lakes were a source of fresh water and food. The Pueblo People are the descendants of these first immigrants.

Most intriguing is that these first people may have arrived, but it would be tens of thousands of years before they transitioned from hunter-gatherer’s and built permanent settlements.

Early man began to experiment with cultivating plants, corn or maize is the most well-known crop, but there was also potato, squash, beans, and sunflower.

The people named the Anasazi suddenly vanished from this region about 800 years before present. These first people had developed the pueblo and their abandoning the dwellings was thought to be the result of climate change and drought. New theories speculate that there is evidence of tension between tribes and potential of mass killings, enslavement, and cannibalism. The lack of water may have set in motion a more predatory behavior between the various groups settled in this region.

Perching as they did on the cliffs appears to be designed as a fortress structure. The cliff dwellings were not built to withstand water scarcity. After the end of the last ice age, while the climate shifted from wetter to drier conditions no longer favored a people living in this region. The vast system of freshwater lakes begin evaporating and are gone in just a few thousand years.

A wave of immigrants then swept across the continent introducing Old World technology to a New World. Coal was burned to power the steam engine, then oil was refined to power the piston engine. There were sewers and water wells. By 1895 hydroelectric power stations began making electricity available to the masses.

A straight line connects the carbon based energy system of the Industrial Revolution to the climate emergency.

Traveling across the Navajo Nation in Northern Arizona and New Mexico the evidence of our first people is scattered across a vast landscape. Genetic markers identify the Korean peninsula as the origin of these people. Navajo prefer the name Diné to identify the people of their nation.

The ancestors of the Diné have been in North America for tens of thousands of years. The new human inhabitants evolved with a climate that grew warmer and drier, at this same time period animals such as camel and mastodon vanished into extinction.

These first people began to fabricate cliff dwellings and whole villages, fields were cultivated and farmed diverting water from the adjacent rivers. The Diné describe water as a living spirit, that the rivers, lakes, sun and earth are key to unlocking the miracle of life.

As the Department of the Interior rolls out the non-carbon based renewable energy system for this new century Biden’s Build Back Better plans is to enlist the wisdom of our indigenous people in our effort to reimagine our economy.

The Industrial Revolution was powered by and is still dominated by use of fossil fuels. We’ve altered our climate and it is now clear that mankind has unleashed all manner of trouble upon itself. It is the culture of our first people who have lived here longer than any other people, that it is the Diné who have sought out a means of being here in harmony with the earth. For our world to survive we would be wise to enlist the talents of all our tribes, each part of our many people can contribute to this transformational journey.

Embracing a multicultural path to fixing our energy system is only one of many existential challenges confronting the American West. Wildfire, heatwaves, and drought are the tip of the spear to the changes bearing down upon this region.

Most urgent is the persistent loss of water flowing into the Colorado River. Constructing both the Glen Canyon and Hoover Dam’s occurred during an era that was unusually wetter than at present.

Appointed by Bill Clinton former Commissioner of the Bureau of Reclamation Daniel P Beard in 2015 concluded that the time had come to remove the Glen Canyon Dam. What prevents this right decision from being taken? A set of interlocking stakeholders that receive subsidized water. The unfettered flow of the Colorado River water to western landholders is about to be shattered.

Water law is complicated but the problem it has created is not. Too much water is being wasted growing too many crops unsuited to this region’s climate. Members of the Water Nobility have outsized wealth created by receiving an irrationally bestowed entitlement. This is the people’s water, it is for all of us, not just the lucky few. But the current stakeholders will fight to keep what they’ve mistakenly come to believe is their water.

What we’ll see play out over the next years are negotiations between Colorado, Wyoming, Utah, New Mexico, Arizona, Nevada, California, and our international neighbor to the south Mexico. Every stakeholder is going to demand more, and all will come away with less, some will lose access altogether.

The Bureau of Reclamation and Department of Agriculture will attempt to bring an end to subsidizing crops grown with subsidized water. The firestorm these changes setoff are going to be monumental. But the climate emergency is now upon us and with its arrival the American West finds itself struggling to divide up less and less to the point where there is no more water to divide up.

Knowing full well that they will fight to the last drop, surrendering nothing, arguing over everything, never agreeing to anything, holding out as the American West is brought to the brink. This is the tragedy of the commons playing out before our very eyes. The pending negotiations over how to share what water remains in the Colorado River does not yet dominate the headlines, but this crisis even if it rains this next season is going to pit state against state all too soon.

Postscript… I’m preparing a new plot to a comedy. Some pieces of the water crisis will be folded into this struggle. I see this as Little Big Man and Dr. Strangelove doing battle with the Monkey Wrench Gang. I remind myself while trying to plot this story that Hayduke and Mandrake are both still very much alive!