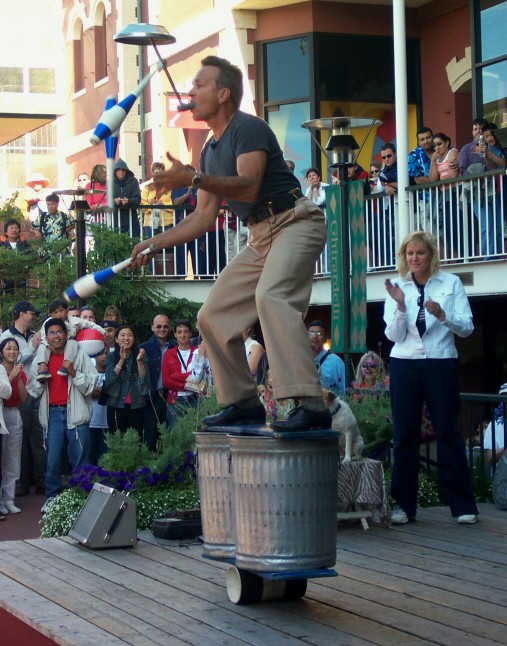 Street theater is about profitably stopping people dead in their tracks. Two becomes 4, 4 turns into 8; eight becomes an engaged audience of fifty. Survivors of this hustle have an eye, feel the vibe— know how quick they’ll draw a crowd and how long they dare to hold them. Change the show’s length, alter the pace, adapt and perform to live another day, execution is whole enchilada. Wily buskers got this one word— “survival” tattooed across their chest— there is no second chance, prosper or perish, show up, play big, be present for the only moment that counts. Get real or sit back down, life is short.

Home field advantage is a term of art meaning playing the same space. Fine tuning the act is having a plan when the chimes to the courtyard clock ring. The sharpest tacks in the hunt for an audience can preplan then unload the perfectly timed zinger. Play your hand swift and sure, be on your toes, don’t get caught, stay loose, fresh, act quick while you possess the advantage of surprise. Time is of the essence.

Street performers are premeditated—  Glance around, count bodies— are they older, younger, can you smell the money in the crowd? Intuit mood, develop a game theory— come to the arena of street with a launch strategy. When starting a show make damn sure that you start your show. Is it a slow build or a quick start? Does it feel like you are pulling teeth? Are you slaying? Killing? Shooting fish in a barrel? Time tested material displays prowess. Audiences find a performer’s deft grip reassuring. Your job is to be dead certain they’re buying what you’re selling.

Buskers know the score, the headlines, front page, chess puzzle and constant disappointment of not being listed in the entertainment section. The winners in our world are lauded, the rest is fodder for the comic cannons. What’s the same, what’s different, what’s going on? Maybe it isn’t the size of your audience but it is the type. Maybe there are more children, more teens, or elderly. Read and react. If you can’t figure people out, you’re having an off day, out of rhythm? Pack it in. Do yourself and everyone else a favor, go to the tanning salon.

Offseason I worked Friday, Saturday and Sunday. Each day I set out to do ten sets, and depending upon flow and energy settled on at least 8. The real trick was squeezing the 8 shows into an efficient 3 hour work day. You try shorter, try longer but the best money was earned nailing the finale before the fifteen minute mark. 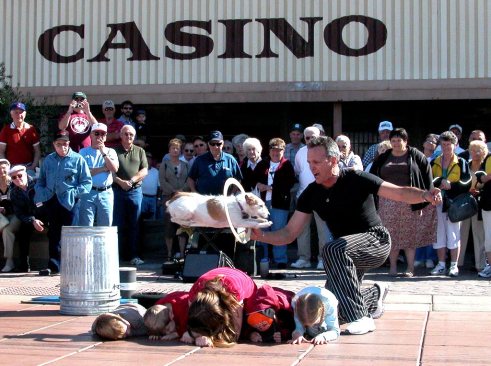 Closer was a Jack Russell Terrier

With tourist season in full swing from Memorial Day to Labor Day the sidewalk performers worked full time— 5 or 6 days on, 1 or 2 off. Strike while the iron is hot. By the end of that first summer I’d cranked out five-hundred shows. Once peak season ended I dialed back to 3 days per week again. I’d squirreled away more than half my summers take. I’d nurse my nest egg, make ends meet, and if I’d survived take another run at the big bucks next summer. Sidewalk showmanship is all about staying in the big game of betting everything or going broke trying.