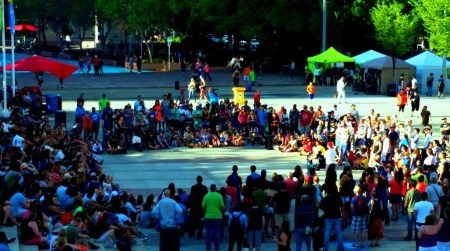 Variety show preparation continues. Physical skills practice is one piece of the puzzle. Another piece is adding new material. In this instance it is woven into the opener and closer.
Most of this material is now memorized, but the jokes require context, setup and then let the line go. If the lines were merely recited things would be infinitely less difficult but they are not. A street act has to fit the line into the moment. That is the unmistakable mark of showmanship. 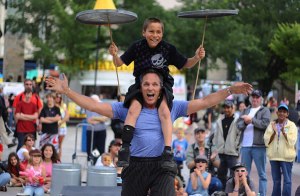 I’ve got several edited musical pieces to physically improvise. Being visual is street performing.
Performing at the Edmonton International Street Performers Festival is an anxiety making prelude. Surrounded by the best of the best takes some steeling of nerves. All of us want to believe we belong. Performers take their material place it into the moment and proof their blueprint by testing its merit with an audience.
Then, there is a laugh, maybe an audience applauds and all of a sudden you’re over the worst of the thing and ready.

To meet the moment there is a madcap dash backstage when then all at once you hear the stage manager make that fateful call for all of us to take our places. The stage manager under the direction of the producer signals the start by wave of hand.
A thousand performers and more in the last 35 years have waited standing on their mark anticipating this Shakespearean surge of love, laughter and madcap playfulness. North America’s premier street performer’s festival comes to a roiling boil in the living, beating heart of North America’s most populous northernmost city this July as it has every July for the last 35 years.

Like the time of your life, there is no other better moment to make the most of than this one moment we have all been given.