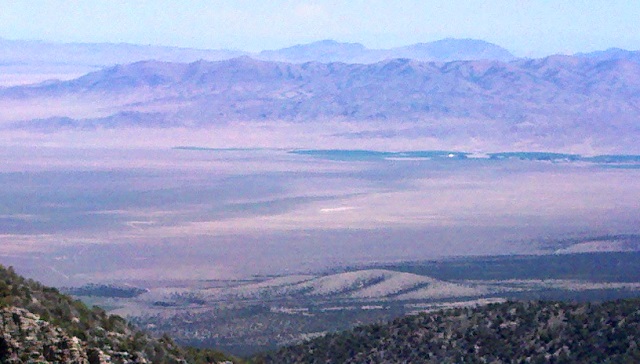 In the Distance the town of Meadowhawk, Nevada

I soon discover whether a situation is inherently funny. If it isn’t funny it becomes clear that the scene will depend on characterization. If character and circumstances fail next is to write a funny line to try and carry the scene. Then, after being dissatisfied with that I’ll circle back and try and approach the scene from another point of entry. Might be a different character, might be a different place, a different circumstance, so long as it contains the necessary plot points needed to carry the story along that’s all that matters, at least that’s all that matters after you have found a way to drive the comic novel forward. Again, there is a lot more trial and error in this type of fictional prose.

“Hazel said a divorced man can’t know how annoying they can be.”

“Maybe a woman’s annoyed because of how she feels about the man.”

“Her being annoyed is not in her imagination,”

“Women get annoyed because we give you everything we got,” Lark said. “At least that’s what Hazel and Gretel say.”

“So what’s the problem?”

“Just about the time we give ourselves to the man, the man stops appreciating it.”

“I’m out of my mind crazy for that woman.”

“And she’s afraid the first time she’s nice to you… that’ll be the end of that.”

“You mean for us to be mad about each other we can never be nice to one another?”