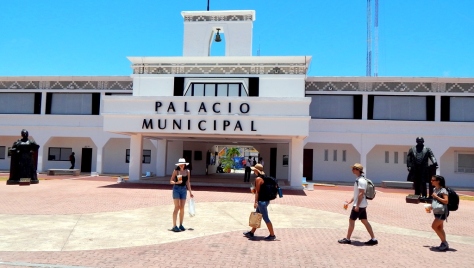 The Mayan People as Example

Our globalized interconnected world was sold as a cure all for every kind of inefficiency of free enterprise. Free markets were going to spread democracy to every corner of the earth.

Something went wrong. I know it, you know it; we all know that something is wrong. We are simply that much more talented at making a mess of the whole project called civilization.

Everything feels like propaganda. Facts go contested while opinion metastases. Every enterprise has a public relations spokesman. Turkey, China and Iran curtail access to the internet for obvious reasons. Internet providers in so called free countries search our search terms for nefarious advantage.

It was hotter in Anchorage, Alaska than in Phoenix last week. Our attention span on that one fact hasn’t even outlasted this last sentence. Down the memory hole the impending disaster vanishes while enterprise of every kind continues to plunge humanity into the corner we find ourselves.

Still, we get that there are some very big players doing everything in their power to remain in power so they may continue to do everything that their balance sheet compels them to do. Individual conscience is irrelevant.

News outlets go rogue. Owned by huge conglomerates our present day journalist is constrained by ownership to exercise self-survival and restraint in criticizing the hand that feeds them. You want to work in Russia? You dance to that tune. How about China? You sing in concert with the power elite there as well. We are all under threat. All the bases have been covered. You step out of line and you are gone.

What we have is a juggernaut where the wealthy the world over have by every means available foisted the best political stalemate money can buy. Ideology and religion is a sideshow. That is so last century. Money is first, last, and always where power actually resides.

China’s pollution isn’t totalitarian. Climate change isn’t a theory. The latest round of free trade talks has not a word in it designed to save us from ourselves.

The most powerful military force in the world can’t win a war.  We have not won in Viet Nam, Iraq, or Afghanistan, Libya, Syria, Ukraine or Israel; each is an intractable problem left unresolved draining us our need to focus on earth’s most urgent problem-global climate change.

With the invention of the shipping container, the standardization of shipping every kind of product across seas was supposed to fix what ailed the world. Prosperity would be shared they promised.

There was plenty of money to be made that ended up in the pockets of the few. That is what is called a global head fake. At the top our elites play a good game of keep away. You think the Cayman Islands are for vacation? Food stamps are for suckers. Unemployment benefits are for slackers. Social security is socialism and national health care is an abomination.

Climate change is not a game. It is a problem that touches every single person in the world. It is about the survival of the human species. Every other issue is subordinated to what we can do to prevent the world going into an irreversible climatic crisis that could trigger the end human life.

We have been conned into transforming our financial system into a worldwide mechanism for amplifying our least moral impulses. We are left scratching our capitalistic heads. The best minds wonder how we can repair the economic and political system before it destroys us all.

WTF is voter suppression about? Somebody please explain why the denial of reproductive health care services for women is a virtue? How about building more nuclear power plants? Why have the police in the United States shot and killed over 400 of us in just the last five months? Who are the sycophants that argue cutting taxes on the wealthiest citizens in the world is the best way to solve every problem we face? Where does this come from?

I speak to not a soul in my daily life that isn’t aware of how off the rails our international system has gone. There are no more winnable wars. There is not a corporation that can be stopped. The climate crisis isn’t coming. It is here.

Can we respond? Can we save ourselves from ourselves? We will know soon enough…